The GE MVS radio is easily available on e-Bay for under $50.00. The two channel VHS models are most common, but you can also pickup 16 channel models with scan, and UHF models. Typical output is 40 watts. Inside the radio at the back where the power line connects is an "option connector." This 13 pin connector allows you to easily hookup input, output and switchable power to run TNC, APRS, and EchoLink functions with this radio.

While the power output is fixed, a quick modification allows you to reduce it as low as five watts for QRP operation. I've done this on two of my radios that are used only to access the local repeater.

You will need to locate or build a programming cable and software, or pay the price to have it done. Other than that, you'll find this a sound radio for these applications.

Download the original GE MVS manual here. This will provide operating information, and in-depth background to the mods shown here, including block diagrams and schematics.

Go to our GE MVS Manuals page for technical manuals on this radio.

On the bottom of the radio is a silver tag with "COMB" then a number/letter sequence, and also "SER#" and a number/letter sequence. There is also some FCC data. What we're concerned with is the "COMB" data. This will tell you the band, frequency range, power output, number of channels, etc. The  website has a complete chart, so I won't repeat it here. Note that many eBayers selling MVSs don't know what they have, so get the combination number off them and find out for yourself before bidding.

Most of these mods are found on the bottom side of the radio. To access it, flip the radio over, and remove the two screws at the front of the metal plate. Simply flip the plate off, and expose the pc board.

The low-power mod, and the adjustments are on the top boards of the radio. This plastic cover snaps on at the side of the radio, near the back. Gently pry the sides out with a screwdriver, and pop it off. 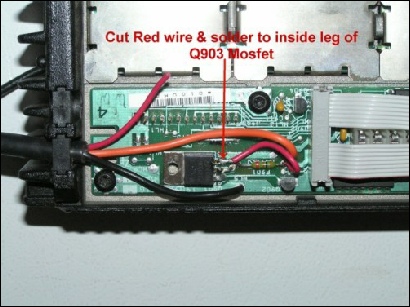 Open the underside of the radio. Clip the red power lead about two inches from the board. Strip a little insulator off, and solder the red wire to the topmost (in the picture) lead on the regulator. This simplifies your electrical hookup. Note F901, the little green fuse. It is discussed further below.

Open the underside of the radio. To the right of Q903 mosfet, you'll see what looks like a green resistor. (It's already removed in the picture below.) It may or may not have resistor-like colour bands. On the board it's labelled F901. It's not a resistor; it's a fuse. Chances are, before you finish all these mods, you'll blow it. When this fuse blows, it shows no visible signs. Check it with an ohm meter for continuity if you suspect it has blown. 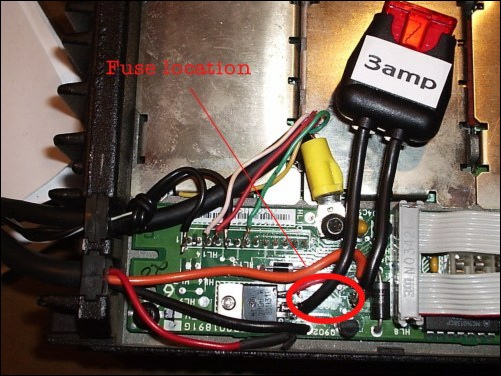 I have found these fuses hard to find, and annoying to replace. So, I replaced it with a fuse holder. Remove the fuse, and solder short leads of wire to each hole. Solder a fuse holder to these leads, and insert a 3 amp fuse. Alternatively, one lead of the fuse holder may be soldered to the centre lead of the MOSFET. All my MVS radios are in fixed locations. If you are using your radio in a car, you may want something a little more robust than that, but you get the idea.

(The ignition sense mod photo, above, shows the F901 fuse quite well.)

If it applies to you, there's an easy mod that reduces the power output on the radio. This is the topside of the radio, at the back. Modifying the jumpers as described in the photos below will reduce the power output from 40 watts to ten watts. Backing off the trim pot (see adjustments below, will reduce output to five watts.

There are several trim pots on the top side of the radio offering adjustments, as indicated in the photo. 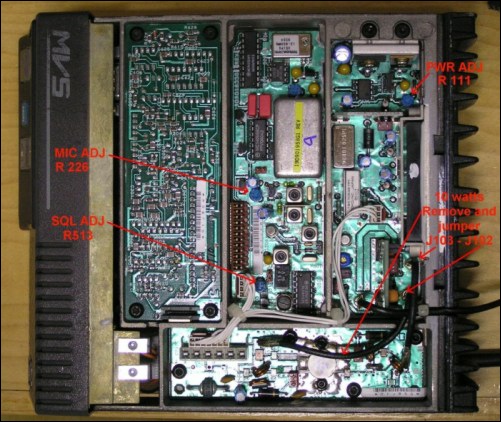 On the System Board, you'll see a row of 13 pins. They are shown in the photo below, with the relevant pins labelled. The manual shows all pins and their purpose. 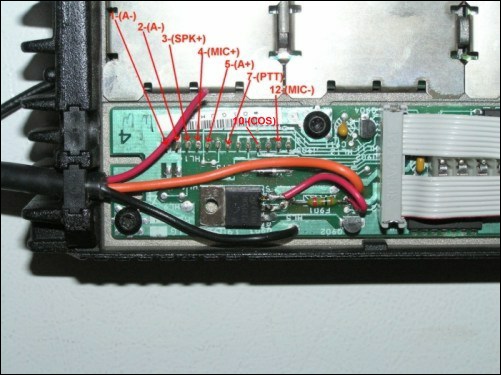 If you are running a TNC or interface (like a SignaLink) that requires power, connect - to #1, and + to #5. Audio to the radio is #4. Ground it to a screw on the board.

Audio from the radio is #3. The audio level from pin #3 varies depending on the volume setting of your radio. Set the volume level where you want it for proper audio levels into the computer, and leave it. I have found that even at its lowest setting, the audio-out is often too hot. Try  putting a 20K trim pot in series to adjust the level. For more information on this, see the IRLP wiring section.

The MVS volume setting does not go down to 0, which is I've rigged a switch that bypasses the speaker and runs the audio through an 8 ohm resister to create a mute function. The manual indicates that to create a mute function, solder a switch that shorts #10 to ground. When #10 is shorted to ground, the speaker is muted. Output levels to #3 are not affected. However, #10 works as a COS indicator, which is useful in many applications. (#10 will go to +5vdc when a signal is received.)

The mic connector has the same functionality as the option connector. Pins are shown in the photo below. Be careful. Shorting certain pins with power on will blow the internal fuse. 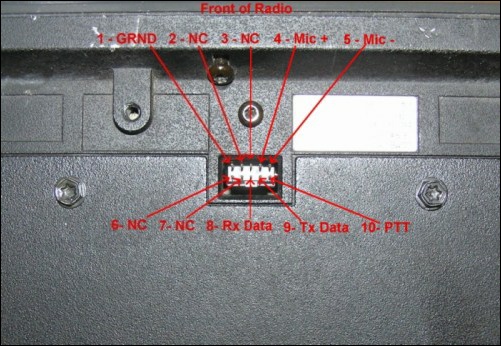 There are other good GE-MVS sites, namely:

Thanks to Scott, VA3EXT for all his help teaching me many of these mods, and for many of the  photos in this article.

In certain situations, you may want to bypass the power switch. This will ensure that the radio is always on, and that it will turn on automatically in the event of a power failure, once power is restored. (Note, that a feature of the MVS is that it will power up to the channel is was set to when it turned off.)

To set a GE-MVS to always be ON (also called "data mode"), jumper between the drain and source of Q903. This is the same transistor used in the “ignition sense mod.” Jumper the pin where you attached the red wire to the  centre pin.

This applies to UHF and VHF models.

R513 in this photo is not the squelch. It adjusts the audio level from the RF (receiver) board to  the audio board. It should be left nearly fully clockwise for proper squelch operation.

The squelch pot is accessed through a hole on the audio board (inverted,  on the left of the photo). It is labelled.

Thanks to Bill, K4OOO for pointing  this out. (A new photo will be uploaded shortly).